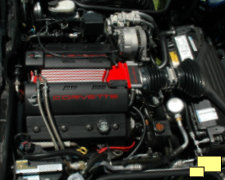 As with the C3 generation, the last of the C4 offered something unique. A special run of 1,000 Grand Sport Corvettes (RPO Z16; $3,250 - $2,880 for the convertible) with Admiral Blue paint and a distinctive white stripe (affectionately known as the "skunk strip") were offered. The option included the LT4 engine (right) and a separate serial number sequence. It was a tribute to a series of five 1963 racing Corvettes that were the brainchild of Zora Arkus-Duntov. Zora produced the Grand Sports on the sly but when his bosses learned of their existence, the program was axed since it violated corporate policy.
The livery is distinctive but it more than looks good however - the colors have a basis in motorsports history. For many years the nationality of a racing team could be determined by the car colors. The British featured British Racing Green, the Germans had silver, the Italians were red and so on. American cars had a choice of blue with a white strip or white with a blue stripe. The 1996 Corvette Grand Sport was a nod to that tradition.
Below left: fuel filler door emblem; right: brief red stripes located only above the left front wheel, as seen on one of the original Grand Sport race cars. 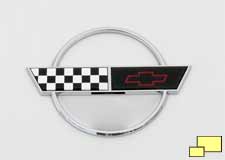 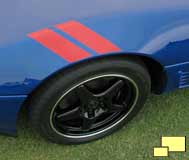 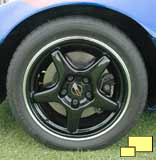 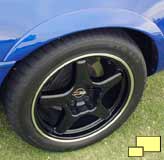 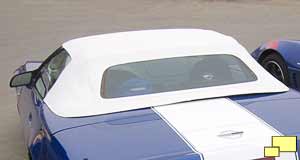 {"commentics_url":"\/\/corvettestory.com\/commentics\/","page_id":1020,"enabled_country":true,"country_id":0,"enabled_state":true,"state_id":0,"enabled_upload":false,"maximum_upload_amount":3,"maximum_upload_size":5,"maximum_upload_total":5,"securimage":true,"securimage_url":"\/\/corvettestory.com\/commentics\/3rdparty\/securimage\/securimage_show.php?namespace=cmtx_1020","cmtx_wait_for_comment":"cmtx_wait_for_comment","lang_error_file_num":"A maximum of %d files are allowed to be uploaded","lang_error_file_size":"Please upload files no bigger than %.1f MB in size","lang_error_file_total":"The total size of all files must be less than %.1f MB","lang_error_file_type":"Only image file types are allowed to be uploaded","lang_text_loading":"Loading ..","lang_placeholder_country":"Country","lang_placeholder_state":"State","lang_text_country_first":"Please select a country first","lang_button_submit":"Add Comment","lang_button_preview":"Preview","lang_button_remove":"Remove","lang_button_processing":"Please Wait.."}