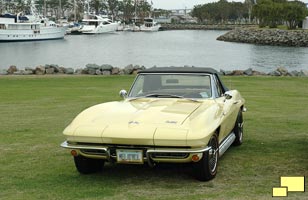 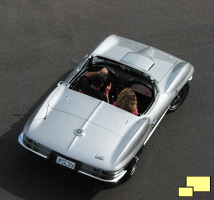 1966 Corvette Stingray:
The Year of the Big Blocks

Big block engines dominated the Corvette Stingray story for 1966. They first appeared in April 1965 and as such had limited exposure. 1966 extended the big block Corvette story with the introduction of the legendary 427 cu. in. motors. They were bored and stroked versions of the 396 cu. in. 1965 big block motors and were available in two flavors: 390 hp (RPO L36, $181.20) and 425 hp (RPO L72, $312.85). The extra cost for the L72 was justified as it included four bolt mains, impact extruded aluminum pistons, a very aggressive camshaft, Holly 780 CFM carburetor mated to a aluminum intake and a free-flowing exhaust. The K66 transistorized ignition was a mandatory option with the L72. There are reports that the L72 actually featured more horsepower than the 450 hp that was quoted. The specifications were downgraded to avoid undesirable backlash from safety legislation, but enthusiasts only had to read the magazine reviews to learn what was really going on.

Above: The "Corvette Sting Ray" script was revised to a more vertically elongated style for 1966. For 1966 only it appeared on the hood front driver's side in addition to the right rear.

Notification of the engine displacement appeared on the front fenders.

GM, per the 1966 brochure, was rightfully proud of the four wheel disk brakes which first appeared on the 1965 Corvette. 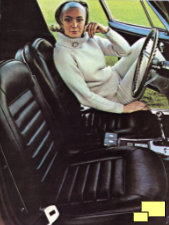 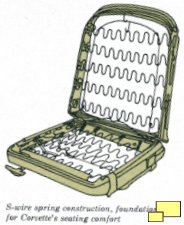 Corvette C2 seating was quite comfortable, definitely more so than the C1, and, some would argue, better than the early C3 seats. 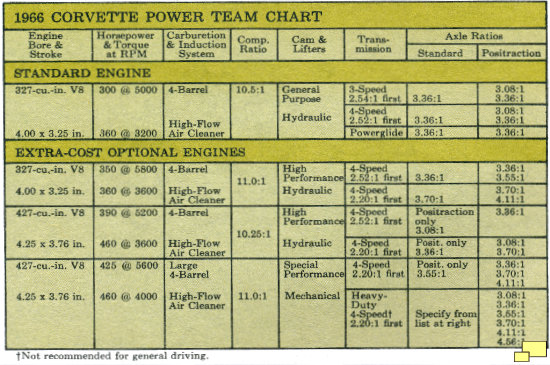 Drivetrain choices were nicely varied in 1966. Notice the number of axle ratios available, quite a contrast to later years when regulations would effectively limit the number of options. The "Not recommended for general driving" refers to the famous M22 "Rock Crusher" Muncie four speed transmission. The M22 was exceptionally strong but, due to its straighter cut gears, had an audible whine. 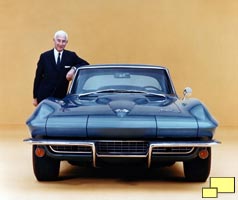 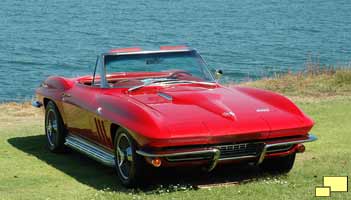 Left: Zora Arkus Duntov, Corvette Chief Engineer, next to a 1966 Corvette, a highlight of his career. 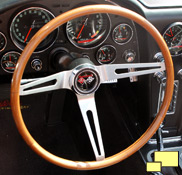 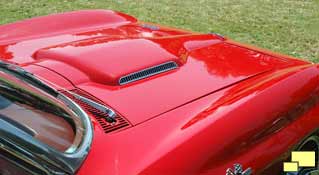 Left: Teak steering wheel was a handsome option (RPO N32, $47.40) that was first available in 1965. Middle: As in 1965, the "Bubble" hood signified a big block was lurking beneath. Above Right: Stylish emblem on the rear deck also functioned as a lid for fuel fill-up access. 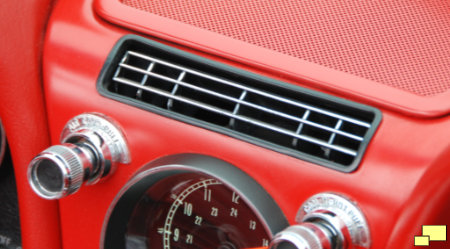 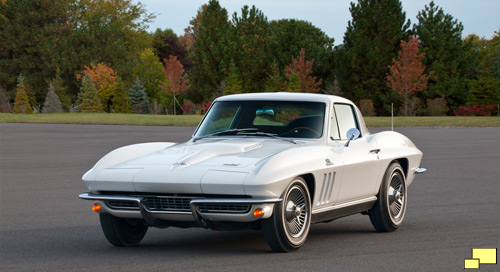 {"commentics_url":"\/\/corvettestory.com\/commentics\/","page_id":1805,"enabled_country":true,"country_id":0,"enabled_state":true,"state_id":0,"enabled_upload":false,"maximum_upload_amount":3,"maximum_upload_size":5,"maximum_upload_total":5,"captcha":true,"captcha_url":"http:\/\/corvettestory.com\/commentics\/frontend\/index.php?route=main\/form\/captcha&page_id=1805","cmtx_wait_for_comment":"cmtx_wait_for_comment","lang_error_file_num":"A maximum of %d files are allowed to be uploaded","lang_error_file_size":"Please upload files no bigger than %.1f MB in size","lang_error_file_total":"The total size of all files must be less than %.1f MB","lang_error_file_type":"Only image file types are allowed to be uploaded","lang_text_loading":"Loading ..","lang_placeholder_country":"Country","lang_placeholder_state":"State","lang_text_country_first":"Please select a country first","lang_button_submit":"Add Comment","lang_button_preview":"Preview","lang_button_remove":"Remove","lang_button_processing":"Please Wait.."}