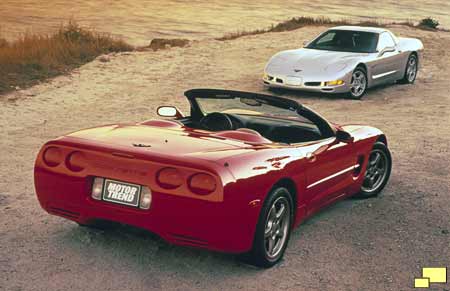 When Chevrolet introduced the C5 Corvette in 1997, it was under very difficult circumstances, all of which have been well documented. They did a lot, more in fact than any other Corvette generation. But they did not do everything and one element - a convertible - was missing. 1998 was the year that the C5 convertible made its appearance. 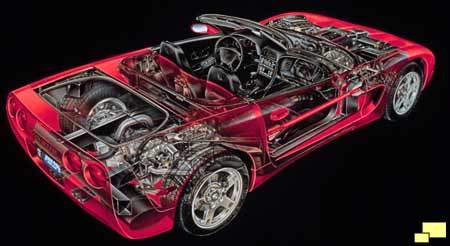 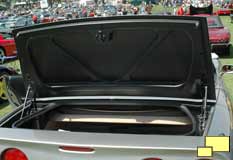 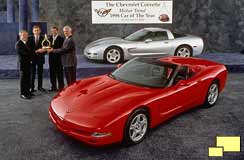 Left: Something the world had not witnessed in 36 years - a conventional trunk on a new Corvette. It was last seen in 1962, the final year of the C1 but was now part of every convertible. The C3 and C4 convertibles had minimal storage accessed through the passenger compartment. Right: The 1998 Corvette (both coupe and convertible) was the recipient of Motor Trend magazine's "Car of the Year" award. 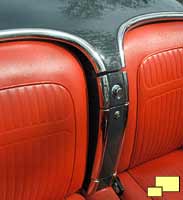 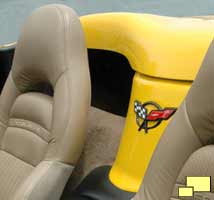 The stylists went back to the Corvette roots (left, a 1958) with the "waterfall" interior in the new convertible (right). A more open effect was the result of extending the exterior into the interior, a common styling element of classic sports cars.

The Corvette was chosen as the pace car for the Indianapolis 500 for the fourth time*. 1,163 pace car replicas (RPO Z4Z; $5,039.00) were sold and featured special trim. The paint scheme included graphics (hood, above left; wheels right; side, below) which could not possibly be described as subtle. The interior was black / yellow leather.

{"commentics_url":"\/\/corvettestory.com\/commentics\/","page_id":1224,"enabled_country":true,"country_id":0,"enabled_state":true,"state_id":0,"enabled_upload":false,"maximum_upload_amount":3,"maximum_upload_size":5,"maximum_upload_total":5,"securimage":true,"securimage_url":"\/\/corvettestory.com\/commentics\/3rdparty\/securimage\/securimage_show.php?namespace=cmtx_1224","cmtx_wait_for_comment":"cmtx_wait_for_comment","lang_error_file_num":"A maximum of %d files are allowed to be uploaded","lang_error_file_size":"Please upload files no bigger than %.1f MB in size","lang_error_file_total":"The total size of all files must be less than %.1f MB","lang_error_file_type":"Only image file types are allowed to be uploaded","lang_text_loading":"Loading ..","lang_placeholder_country":"Country","lang_placeholder_state":"State","lang_text_country_first":"Please select a country first","lang_button_submit":"Add Comment","lang_button_preview":"Preview","lang_button_remove":"Remove","lang_button_processing":"Please Wait.."}