The Corvette was chosen to pace the Indy 500 for the third time in 1995. 527 replica pace cars were produced with a two-tone purple and white paint scheme and wild ribbon striping.

Changes were few for 1995, mostly because a new generation Corvette was in the works and most of the development resources were oriented towards that effort. Left: the front fender gills were updated with a more speedy emphasis. 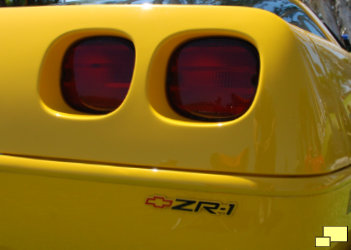 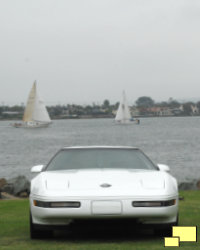 Left: 1995 would be the last year for the ZR-1. Total ZR-1 production for the six model years was 6,939. Right: 1995 Corvette Coupe in Arctic White.
Larger brake rotors which were part of the Z07 adjustable suspension package were on all 1995 'vettes. Since "run flat" tires effectively eliminated the need for a spare tire, buyers had the option of deleting the spare, saving $100.00 along with the associated weight.

{"commentics_url":"\/\/corvettestory.com\/commentics\/","page_id":1527,"enabled_country":true,"country_id":0,"enabled_state":true,"state_id":0,"enabled_upload":false,"maximum_upload_amount":3,"maximum_upload_size":5,"maximum_upload_total":5,"securimage":true,"securimage_url":"\/\/corvettestory.com\/commentics\/3rdparty\/securimage\/securimage_show.php?namespace=cmtx_1527","cmtx_wait_for_comment":"cmtx_wait_for_comment","lang_error_file_num":"A maximum of %d files are allowed to be uploaded","lang_error_file_size":"Please upload files no bigger than %.1f MB in size","lang_error_file_total":"The total size of all files must be less than %.1f MB","lang_error_file_type":"Only image file types are allowed to be uploaded","lang_text_loading":"Loading ..","lang_placeholder_country":"Country","lang_placeholder_state":"State","lang_text_country_first":"Please select a country first","lang_button_submit":"Add Comment","lang_button_preview":"Preview","lang_button_remove":"Remove","lang_button_processing":"Please Wait.."}