The Corvette Changed and so did The World

The mid engine Corvette, introduced as a 2020 model, was a completely different animal. For 2021 however, changes were minimal. The two basic body styles - coupe and convertible - saw no changes. The drivetrain, which consisted of 6.2 liter V8 L2 engine mated to an eight-speed dual-clutch automatic transmission, was the same as in 2020.
Covid-19 became a reality that affected almost everyone on planet earth. The Corvette was also impacted, as supplier issues and workforce health caused production to be shut down. Despite the obstacles, 26,216 2021 Corvettes (15,112 Coupe and 11,104 Convertibles) were sold which was an excellent result considering the circumstances.

Starting with orders placed after March 2, 2021, the price of a 2021 Corvette also changed with a $1,000.00 increase. With a starting price of $60,995.00, GM could no longer claim an under $60k Corvette although nobody denied that even with the updated tarif that the Corvette was still a performance bargain. 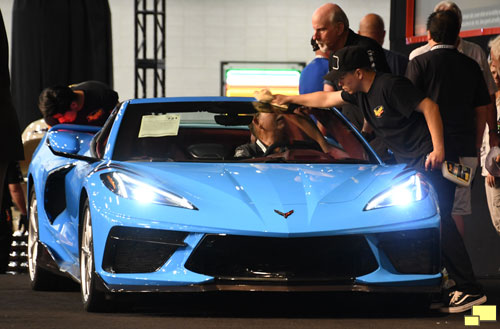 2021 Corvette convertible auctioned at Barrett-Jackson Las Vegas on June 19, 2021 for $127,600 (including the 10% buyers premium). The car had a MSRP of just over $97,000. This was typical of the market at the time.
All doubt that the new mid engine Corvette was a smashing success was removed by the time 2022 Corvette production started on September 6, 2021. The evidence was in the pricing; at public auctions slightly used C8 Corvettes were getting $20,000 or more over MSRP, and that was before the buyers fee, typically eight to 10 percent. Dealers were similarly marking up the C8 prices to willing customers. It was possible to purchase C8 Corvettes for MSRP but the waiting list was about one year.
There's a saying in investment circles: "A rising tide lifts all boats". That was true for Corvette prices as the considerable amount of positive publicity that surrounded the C8 resulted in price increases for all Corvettes. One survey estimated that C7 Corvette prices rose 37%. This was due in part to the restricted production of the C8 which caused C7 owners to hold onto their cors longer. Even C1 through C6 Corvettes saw price increases.

For the 18th time since 1978, a Corvette paced the Indianapolis 500. It was an Arctic White edition and was the first Corvette convertible so selected since 2008. Danica Patrick was the driver, the third woman to do so.

{"commentics_url":"\/\/corvettestory.com\/commentics\/","page_id":1553,"enabled_country":true,"country_id":0,"enabled_state":true,"state_id":0,"enabled_upload":false,"maximum_upload_amount":3,"maximum_upload_size":5,"maximum_upload_total":5,"securimage":true,"securimage_url":"\/\/corvettestory.com\/commentics\/3rdparty\/securimage\/securimage_show.php?namespace=cmtx_1553","cmtx_wait_for_comment":"cmtx_wait_for_comment","lang_error_file_num":"A maximum of %d files are allowed to be uploaded","lang_error_file_size":"Please upload files no bigger than %.1f MB in size","lang_error_file_total":"The total size of all files must be less than %.1f MB","lang_error_file_type":"Only image file types are allowed to be uploaded","lang_text_loading":"Loading ..","lang_placeholder_country":"Country","lang_placeholder_state":"State","lang_text_country_first":"Please select a country first","lang_button_submit":"Add Comment","lang_button_preview":"Preview","lang_button_remove":"Remove","lang_button_processing":"Please Wait.."}