Starting in the mid 1970s, emissions regulations became a significant part of the performance automotive scene. Power output dropped dramatically; the 1975 Corvette was rated at only 165 hp. Car enthusiasts were concerned. If the present was bad, what would the future, which promised more stringent regulations, be like? It did not look good.

They need not have worried. What happened was a long, slow and sometimes painful return to speedier times. Corvette engines steadily gained about five or fifteen horsepower almost every year. By 1991 the L98 base Corvette engine was rated at 250 hp.

It all changed drastically with the introduction of the LT1 motor in the 1992 Corvette. 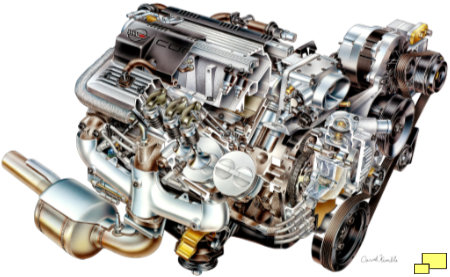 The LT1 (above and right) was named after the highly regarded solid lifter small block LT-1 (note the hyphen) motor first used in the 1970 Corvette. The horsepower increased by 20% to 300 hp. This was accomplished by using computer controlled ignition timing, a low restriction exhaust system, a more aggressive camshaft profile and free-flow cylinder heads. Max. RPM was 5700, a whopping 700 RPM more than its L98 predecessor.

Probably the most interesting change in the LT1 was the revised cooling system strategy. Most engines route the coolant from the water pump to the block and through the head(s). In the LT1, coolant took the opposite path, starting in the cylinder heads and then cooling the engine block. Cooling off the heads first enabled the LT1 to reach new horsepower levels.

Also worth noting: All LT1 engines left the factory with Mobil 1, the recommended lubricant. The synthetic 5W-30 engine oil eliminated the need for a separate oil cooler.

More good news for 1992: The Corvette ASR (Acceleration Slip Regulation) created by Bosch was introduced. Standard equipment on all Corvettes, it worked by retarding the engine spark, closing the throttle and brake intervention. The throttle cable relax feature was interesting. It communicated to the driver that the system was "taking over" by giving him/her a gentle push back on the gas pedal. It was designed with the performance oriented driver in mind and could be switched off.

There was a dark side to all the technological progress. The new "Opti-spark" distributor had problems and were recalled early in the production run. According to some sources, given enough time, they would all fail if not replaced.

Something special happened in 1992: The One Millionth Corvette was built! Click Here for details.

{"commentics_url":"\/\/corvettestory.com\/commentics\/","page_id":1727,"enabled_country":true,"country_id":0,"enabled_state":true,"state_id":0,"enabled_upload":false,"maximum_upload_amount":3,"maximum_upload_size":5,"maximum_upload_total":5,"securimage":true,"securimage_url":"\/\/corvettestory.com\/commentics\/3rdparty\/securimage\/securimage_show.php?namespace=cmtx_1727","cmtx_wait_for_comment":"cmtx_wait_for_comment","lang_error_file_num":"A maximum of %d files are allowed to be uploaded","lang_error_file_size":"Please upload files no bigger than %.1f MB in size","lang_error_file_total":"The total size of all files must be less than %.1f MB","lang_error_file_type":"Only image file types are allowed to be uploaded","lang_text_loading":"Loading ..","lang_placeholder_country":"Country","lang_placeholder_state":"State","lang_text_country_first":"Please select a country first","lang_button_submit":"Add Comment","lang_button_preview":"Preview","lang_button_remove":"Remove","lang_button_processing":"Please Wait.."}