Tough Times For GM
But The Corvette Continues 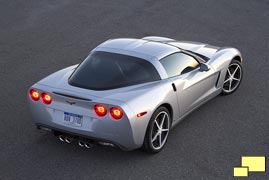 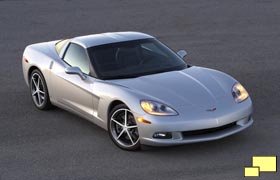 Recent years may not have been easy for the Corvette, but they were much more difficult for parent company General Motors. They had been suffering huge corporate blows, including a 2009 Chapter 11 bankruptcy filing and the shedding of much storied brands including Pontiac, Saturn, Hummer and Oldsmobile.

Despite the turmoil, the Corvette continued. The economic problems of the era took it's toll on Corvette production, which was at a low of 12,194 in 2010. This is less than a third of the 2007 production of 40,561. Faith in the Corvette did not waiver and at a press conference on May 4, 2011, it was announced that GM would invest $131,000,000 in the Corvette plant in Bowling Green KY. Although sales were down, the Corvette was still profitable and had significant value for GM in terms of being a technological flagship and a halo car in the lineup. It was also confirmed that there would be a C7 Corvette in 2014.

Also new and nicely innovative, was the RPO PIN which allowed customers to select the VIN for their Corvette. There were restrictions and approval was necessary depending on availability. The idea was that an owner could arrange for a VIN of a currently owned Corvette to be on a newly purchased Corvette.

A new color, Carlisle Blue Metallic, was introduced in 2012. Also included were new Silver-painted Torque 2 wheels and Pearl White full-length racing stripes. This was a nod to the great Corvettes at Carlisle event held in August every year. The iconic gathering features over 5,000 Corvettes and events including an autocross, a swap meet of legendary size, dyno testing and a parade through downtown Carlisle PA. 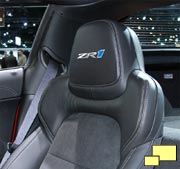 GM was still subjected to criticism that the Corvette seating was not up to the task of a performance car. An answer of sorts was provided in the 2012 models with a slight update in the form of more support in the shoulder area.

Nobody doubted that GM would have preferred to provide true competition style seating; the problem was that a significant change would have required extensive and expensive crash testing. The best guess is that GM decided those resources would be better spent on development of the new C7. 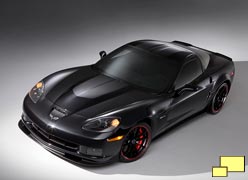 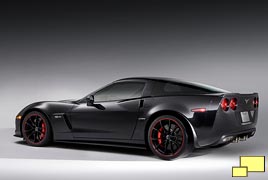 2012 was the 100th anniversary of the founding of the company by Louis Chevrolet and the event was celebrated with the 2012 Chevrolet Corvette Centennial Edition. It's an intimidating Corvette, available only in Carbon Flash Metallic, with satin-black graphics and unique Centennial Satin Black wheels and red brake calipers. The 2012 Centennial Edition package is available on all Corvette models, including the Grand Sport, Z06 and ZR1 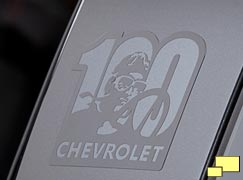 Image of Louis Chevrolet in Satin Black appears on the B-pillars along with the center caps of the wheels (below left) and the center of the steering wheel.

Note the badge emblem (below right) which has "100" in the spot where we are used to seeing the very traditional fleur-de-lis symbol. 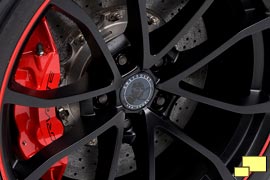 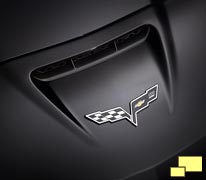 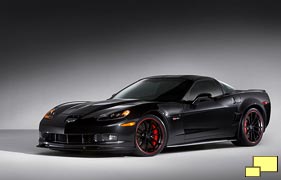 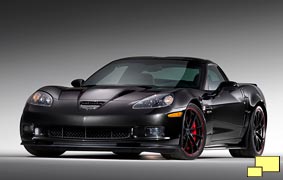 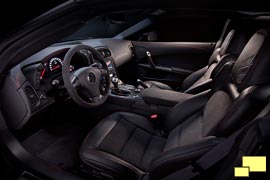 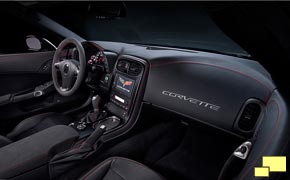 The exterior color scheme is reinforced inside the car, with the Ebony leather-wrapped instrument panel and doors complimented by red stitching on the steering wheel, seats, console and shifter. Microfiber suede accents on Centennial Edition seats, steering wheel, shifter and armrests were first used on the 2011 Z06 Carbon Limited Edition. 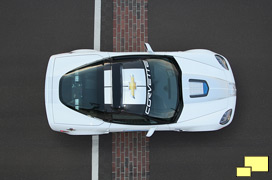 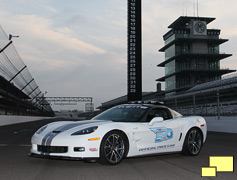 For the 11th time, a Corvette paced the indianapolis 500. The very capable ZR1 was chosen with celebrity chef Guy Fieri as the pilot at least for the parade laps. 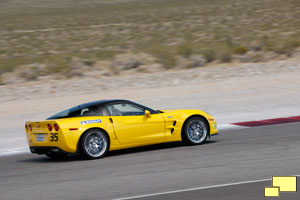 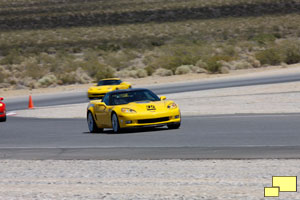 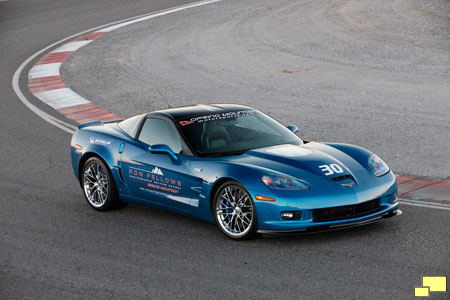 {"commentics_url":"\/\/corvettestory.com\/commentics\/","page_id":46,"enabled_country":true,"country_id":0,"enabled_state":true,"state_id":0,"enabled_upload":false,"maximum_upload_amount":3,"maximum_upload_size":5,"maximum_upload_total":5,"securimage":true,"securimage_url":"\/\/corvettestory.com\/commentics\/3rdparty\/securimage\/securimage_show.php?namespace=cmtx_46","cmtx_wait_for_comment":"cmtx_wait_for_comment","lang_error_file_num":"A maximum of %d files are allowed to be uploaded","lang_error_file_size":"Please upload files no bigger than %.1f MB in size","lang_error_file_total":"The total size of all files must be less than %.1f MB","lang_error_file_type":"Only image file types are allowed to be uploaded","lang_text_loading":"Loading ..","lang_placeholder_country":"Country","lang_placeholder_state":"State","lang_text_country_first":"Please select a country first","lang_button_submit":"Add Comment","lang_button_preview":"Preview","lang_button_remove":"Remove","lang_button_processing":"Please Wait.."}