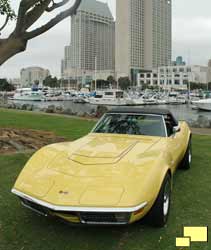 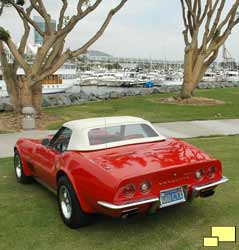 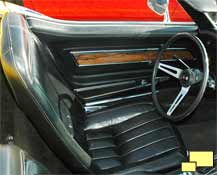 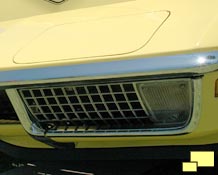 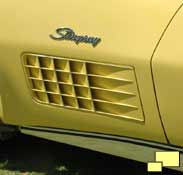 Changes for the 1970 Corvette included more comfortable seats (left), a squared off clear turn signal indicator backed by an amber bulb (although many had an amber lens with a clear bulb) surrounded by an "ice cube tray" style grill (middle) and fender louvers (right). Cool air for the radiator was blocked by the headlights when they were in the down position so airflow to the radiator was mostly pulled from under the car. Other updates included a better seat belt shoulder retractor and headlight washers. 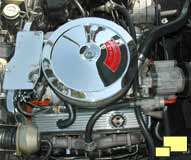 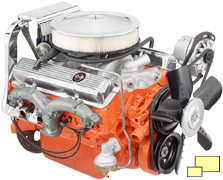 Right: The LT-1 engine debuted in 1970 and was a hit amongst Corvette motorheads. It was essentially a solid lifter version of the well known and loved small block. Road racers welcomed the new motor since the horsepower was up and it's light weight kept the Corvette's balance under control. Notice the finned aluminum valve covers which were added to many non LT-1 engines.

Below left: Center console plaque offered 1970 Corvette LT-1 specs. Later LT-1 engines (it was available in 1971 and 1972) had lower compression ratios. Right: LT-1 tachometer with the 6,500 RPM redline, part of the secret to the LT-1 horsepower rating.

1970 is famous for being the last year that high compression engines were available. Unleaded gasoline was in the future and high octane gasoline was becoming harder to find, causing GM to limit compression ratios after 1970. 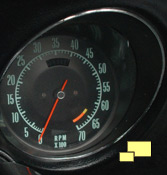 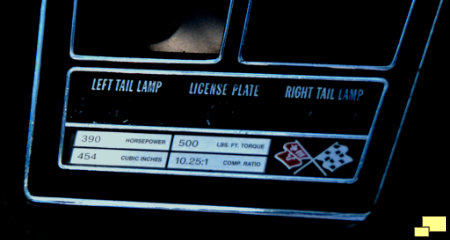 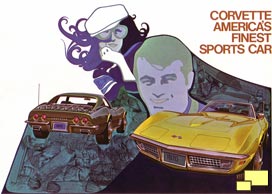 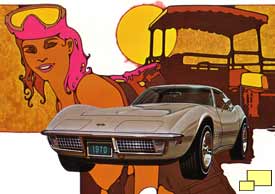 Next: 1970 Corvette ad - Cassini What Else Poster

{"commentics_url":"\/\/corvettestory.com\/commentics\/","page_id":1466,"enabled_country":true,"country_id":0,"enabled_state":true,"state_id":0,"enabled_upload":false,"maximum_upload_amount":3,"maximum_upload_size":5,"maximum_upload_total":5,"securimage":true,"securimage_url":"\/\/corvettestory.com\/commentics\/3rdparty\/securimage\/securimage_show.php?namespace=cmtx_1466","cmtx_wait_for_comment":"cmtx_wait_for_comment","lang_error_file_num":"A maximum of %d files are allowed to be uploaded","lang_error_file_size":"Please upload files no bigger than %.1f MB in size","lang_error_file_total":"The total size of all files must be less than %.1f MB","lang_error_file_type":"Only image file types are allowed to be uploaded","lang_text_loading":"Loading ..","lang_placeholder_country":"Country","lang_placeholder_state":"State","lang_text_country_first":"Please select a country first","lang_button_submit":"Add Comment","lang_button_preview":"Preview","lang_button_remove":"Remove","lang_button_processing":"Please Wait.."}