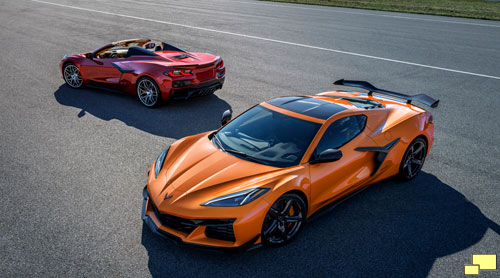 GM had already made a significant statement with the introduction of the 2020 mid engine Corvette C8.

It would speak even louder with the 2023 Corvette Z06. 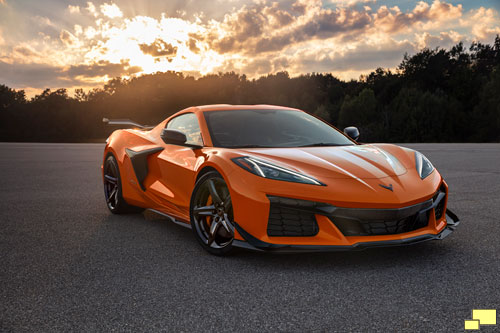 Everybody agrees that the big news came from the engine compartment. But there is still a fair amount on the exterior that makes the C8 Corvette Z06 special. 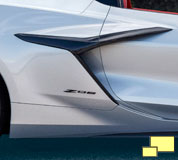 The most obvious Z06 visual distinction is the trim piece that surrounds the side air intake; its affectionately known as the wishbone.

The C8 Z06 is 3.6 inches (9.4 cm) wider than the Stingray, which can be thought of as the standard Corvette. The wider body accommodates massive 345-series rear tires - a necessity considering the 670 hp engine output. The wider body also provides more airflow through the side air vents. 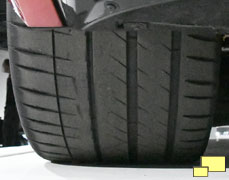 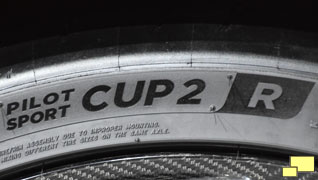 Left: There is some serious rear tire width on the C8 Z06. The 13 inch wide wheel is the largest GM has put on a Corvette; previously the largest was found on the 2019 ZR1 which featured a 12 inch wheel.

More Corvette firsts: A carbon fiber wheel measuring 21 inches - both Corvette firsts - is available on the C8 Corvette Z06. They're available with the Z07 Package and are good for a 41-pound (18.6 kg) reduction in unsprung mass.

The available Z07 package includes a carbon fiber aero package with larger front splitter, front-corner dive planes, a rear wing (above) and underbody strakes that enhance downforce. According to GM, the wing provides 734 pounds of downforce at 186 mph, more than any previous Corvette. Additional features include a unique FE7 suspension with specific v4.0 Magnetic Ride Control.

According to GM, when equipped with the Z07 performance package in the track prepared configuration on a 300-foot diameter circle, the Z06 is capable of 1.22 g of road-hugging grip. 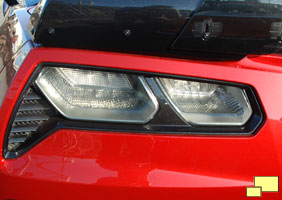 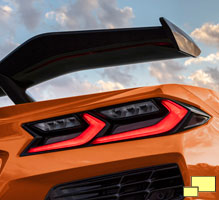 The C7 Z06 and ZR1 (left) got distinctive smoke tail lights but for whatever reason, the C8 Z06 is not similarly equipped. 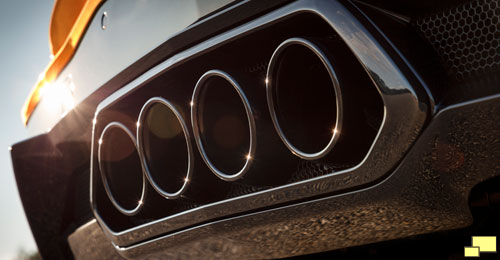 To the delight of many Corvette fans, the Z06 exhaust ended up in the center as opposed to the ends as in the Stingray. 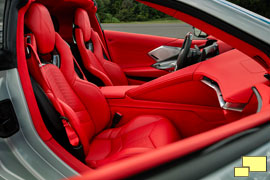 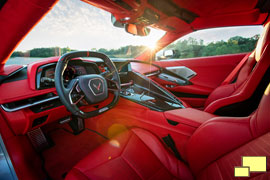 The C8 Corvette Z06 interior is essentially the same as the C8 Stingray; Exceptions include Z06 emblems on the speaker housing (below left) and the steering wheel. 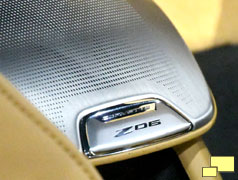 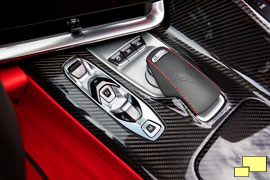 The C8 Corvette Z06 is available as an HTC (Hard Top Convertible). Since the introduction of the C7, GM has had a policy of not restricting Corvette to certain options based on a given model. Previously it was common for transmissions, engines and body configurations to be limited in certain areas; for example Z06 Corvettes of C6 and earlier generations were equipped with manual only transmissions.

So far, pricing and top speed for the 2023 Corvette Z06 has not been announced.

{"commentics_url":"\/\/corvettestory.com\/commentics\/","page_id":1602,"enabled_country":true,"country_id":0,"enabled_state":true,"state_id":0,"enabled_upload":false,"maximum_upload_amount":3,"maximum_upload_size":5,"maximum_upload_total":5,"securimage":true,"securimage_url":"\/\/corvettestory.com\/commentics\/3rdparty\/securimage\/securimage_show.php?namespace=cmtx_1602","cmtx_wait_for_comment":"cmtx_wait_for_comment","lang_error_file_num":"A maximum of %d files are allowed to be uploaded","lang_error_file_size":"Please upload files no bigger than %.1f MB in size","lang_error_file_total":"The total size of all files must be less than %.1f MB","lang_error_file_type":"Only image file types are allowed to be uploaded","lang_text_loading":"Loading ..","lang_placeholder_country":"Country","lang_placeholder_state":"State","lang_text_country_first":"Please select a country first","lang_button_submit":"Add Comment","lang_button_preview":"Preview","lang_button_remove":"Remove","lang_button_processing":"Please Wait.."}