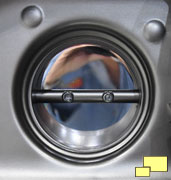 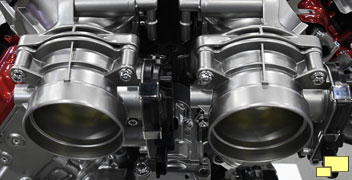 Left: One of the three plenum valves. Some things just look good and shouldn't be hidden! Right: The LT6 is fed by dual 87 mm. single bore throttle bodies, electronically controlled.

A plaque mounted between the plenums identifies the engine builder. It's signed by the person who built the entire engine. 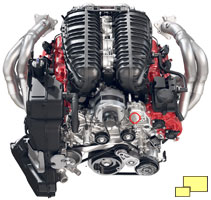 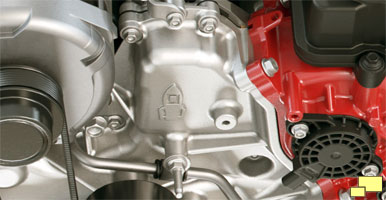 Is a modern Corvette without an Easter egg still a Corvette?

Maybe not as it seems to be the trend in recent years. For the Z06 LT6 engine, a rocket was embossed on the front of the LT6, meaning that it cannot be seen unless the engine is removed which is unfortunate. The backstory here is that the working moniker for the LT6 during its development was Gemini, owing to its two camshafts, two throttle bodies and two fuel pumps. Gemini was also the name of the two astronaut space capsule that preceded the Apollo three astronaut capsule. 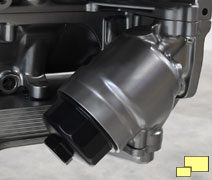 LT6 engine oil filter. During the development of the LT6, the vibrations - a consequence of the flat plane crankshaft - were so bad that a conventional oil filter unscrewed itself on a test stand. A bolted on cartridge filter was the solution.

The oil system is a dry sump, similar to the C8 Stingray. The lower portion of the block has four bays so each crank journal has a sealed bay (reducing windage) with oil scavenged from each bay and the two cylinder heads. Each piston has an oil squirter for cooling. 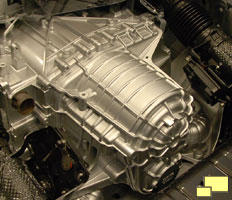 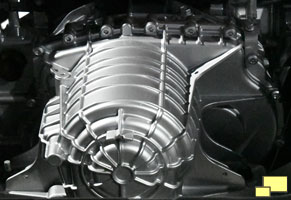 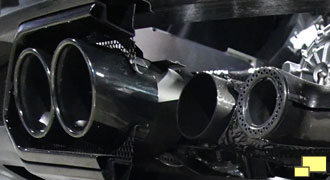 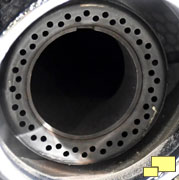 The Z06 engineering team went to great lengths to optimize the sound from the LT6 engine: this included what is heard both outside and inside the car. An innovative solution was found to deliver a superb aural sensation to the occupants. The two outer exhaust outlets actually house a set of bezels that function as "reverse trumpets" which reflect sound back into the cabin. 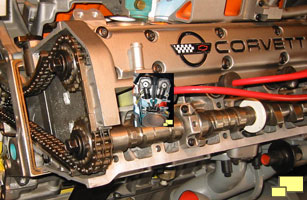 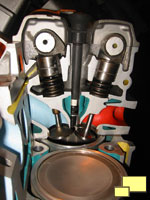 The LT6 in the C8 Z06 was not the first time that double overhead camshafts and four valves per cylinder was available in a Corvette. The LT5 engine in the 1990 Corvette ZR-1 also featured the same configuration and was rated at 375 horsepower; subsequent updates enabled an output of 405 horsepower. Unlike the C8 LT6, the C4 LT5 was designed by Group Lotus and built by Mercury Marine in Stillwater OK.

Below is the 1990 Corvette ZR-1. In addition to the double overhead cams and four valves engine configuration, like the C8 Z06 it also featured a wider rear body. Unfortunately it was not all that visually distinctive from the standard Corvettes at the time which lead to poor sales. It was last sold as a 1995 model. 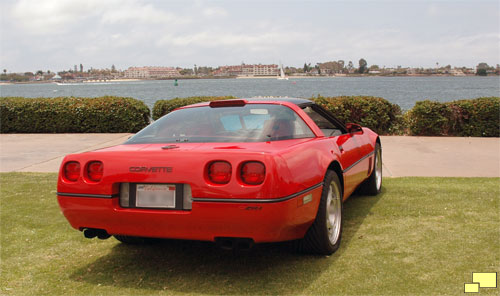 {"commentics_url":"\/\/corvettestory.com\/commentics\/","page_id":1552,"enabled_country":true,"country_id":0,"enabled_state":true,"state_id":0,"enabled_upload":false,"maximum_upload_amount":3,"maximum_upload_size":5,"maximum_upload_total":5,"securimage":true,"securimage_url":"\/\/corvettestory.com\/commentics\/3rdparty\/securimage\/securimage_show.php?namespace=cmtx_1552","cmtx_wait_for_comment":"cmtx_wait_for_comment","lang_error_file_num":"A maximum of %d files are allowed to be uploaded","lang_error_file_size":"Please upload files no bigger than %.1f MB in size","lang_error_file_total":"The total size of all files must be less than %.1f MB","lang_error_file_type":"Only image file types are allowed to be uploaded","lang_text_loading":"Loading ..","lang_placeholder_country":"Country","lang_placeholder_state":"State","lang_text_country_first":"Please select a country first","lang_button_submit":"Add Comment","lang_button_preview":"Preview","lang_button_remove":"Remove","lang_button_processing":"Please Wait.."}