A Corvette paced the Indy 500 race and a special edition paint consisting of light silver on the lower body and black above, separated by a red stripe and special seats marked the occasion. Originally production was to be limited to 300, a nod to the production quantity of the 1953 'vette. But demand increased and soon Chevrolet had a problem: which dealers would be allocated one of these special Corvettes? The problem was solved by producing 6,502 Indianapolis 500 pace car replicas, enough so that each dealer would get one and a few promotional extras.
Despite the fact that a production quantity of 6,502 removes any potential for a "rare" designation, a buying frenzy ensued and the sticker price of $13,653.21 was often doubled. The Wall Street Journal entered the fray with a prominent article outlining the situation and hints that prices would be higher in the future. The result was that the general public entered the market, making buying decisions that were illogical.

Purchasers who thought that profitability was part of the special edition Corvette ownership were disappointed. This often happens when the public gets interested in collector cars as investments. One problem was the high production quantity of 6,502. The other was that the option was only a badge, paint job and decal exercise. There wasn't a special engine or even suspension in the story, so future enthusiasts passed in favor of Corvettes with something worthwhile to offer. 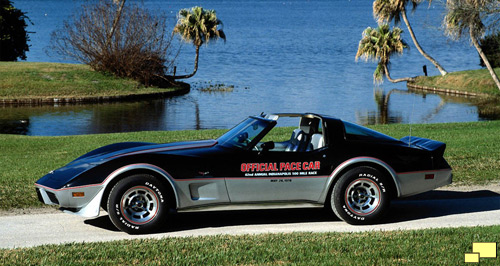 Below and left: decals commemorating the event were shipped with all 6,502 replicas, and it was up to the buyer to make the installation decision. The pace car replicas had their own VIN number sequence. 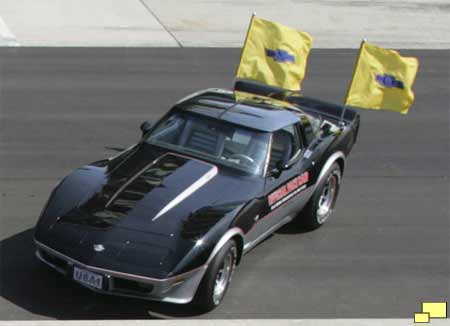 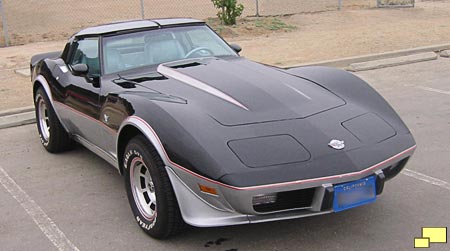 Above and below: 1978 Chevrolet Corvette Pace Car replicas without the decal installation.

{"commentics_url":"\/\/corvettestory.com\/commentics\/","page_id":910,"enabled_country":true,"country_id":0,"enabled_state":true,"state_id":0,"enabled_upload":false,"maximum_upload_amount":3,"maximum_upload_size":5,"maximum_upload_total":5,"securimage":true,"securimage_url":"\/\/corvettestory.com\/commentics\/3rdparty\/securimage\/securimage_show.php?namespace=cmtx_910","cmtx_wait_for_comment":"cmtx_wait_for_comment","lang_error_file_num":"A maximum of %d files are allowed to be uploaded","lang_error_file_size":"Please upload files no bigger than %.1f MB in size","lang_error_file_total":"The total size of all files must be less than %.1f MB","lang_error_file_type":"Only image file types are allowed to be uploaded","lang_text_loading":"Loading ..","lang_placeholder_country":"Country","lang_placeholder_state":"State","lang_text_country_first":"Please select a country first","lang_button_submit":"Add Comment","lang_button_preview":"Preview","lang_button_remove":"Remove","lang_button_processing":"Please Wait.."}