Nobody will argue that the mid years Corvettes is one of the most successful automotive designs of all time. Adding to the legend is that nothing - before or since - looks quite like the 1963 thru 1967 Corvette. But there was a downside.

That awesome horizontal crease which ran the circumference of the car and the four fender blips restricted the wheel size. This became a problem for racers such as the '63 Grand Sport (below). Wider tires, necessary for increased cornering forces in competition, could only be accommodated with fender flares that significantly altered the Corvettes' look.

There was another issue. Big block engines debuted in 1965 and the increased horsepower caused traction problems with mid year Corvettes, which were restricted to a maximum 15 inch x 6 inch wheel. The obvious solution was more rubber on the road but there was no way a larger wheel could be used and still retain the classic look. The C3 'vette solved the problem nicely with a fender flare that could be increased and still be faithful to the original design.

Below: C3 race car shows how wider tires were possible without changing the styling look. 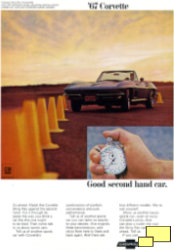 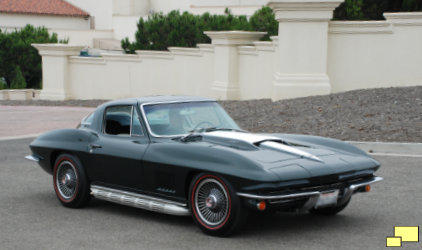 The front fender ducting changed to a "gill" arrangement exclusively for 1967. The aluminum wheels lost their knock-off styled ears, a concession to upcoming safety regulations.

The prevailing wisdom was that the coupe (left) had an advantage as a racer due to superior aerodynamics. But a number of racers proved that the lower center of gravity in the convertibles (right) was an overlooked factor. 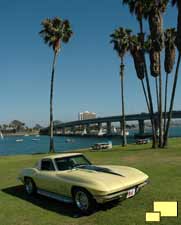 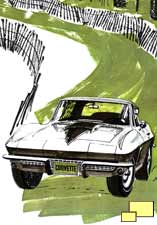 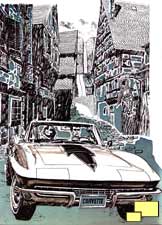 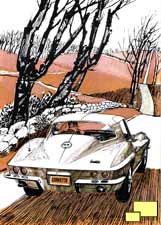 {"commentics_url":"\/\/corvettestory.com\/commentics\/","page_id":1053,"enabled_country":true,"country_id":0,"enabled_state":true,"state_id":0,"enabled_upload":false,"maximum_upload_amount":3,"maximum_upload_size":5,"maximum_upload_total":5,"securimage":true,"securimage_url":"\/\/corvettestory.com\/commentics\/3rdparty\/securimage\/securimage_show.php?namespace=cmtx_1053","cmtx_wait_for_comment":"cmtx_wait_for_comment","lang_error_file_num":"A maximum of %d files are allowed to be uploaded","lang_error_file_size":"Please upload files no bigger than %.1f MB in size","lang_error_file_total":"The total size of all files must be less than %.1f MB","lang_error_file_type":"Only image file types are allowed to be uploaded","lang_text_loading":"Loading ..","lang_placeholder_country":"Country","lang_placeholder_state":"State","lang_text_country_first":"Please select a country first","lang_button_submit":"Add Comment","lang_button_preview":"Preview","lang_button_remove":"Remove","lang_button_processing":"Please Wait.."}