1997 Corvette Styling:
Something Old, Something New

Although the styling was all new, many of the old themes were still present and there was no risk that anyone would mistake the new shape for anything other than a Corvette. Four tail lights, a Corvette staple since 1961 were prominent as was the long thin coke bottle shape reminiscent of the C3 introduced in 1968. When asked, Corvette owners made it clear that tradition was important to them and they got what they wanted.

The Coves are Back! Well, sort of. The wonderful styling element last seen in the late 50s and early 60s made a subdued return in 1997. 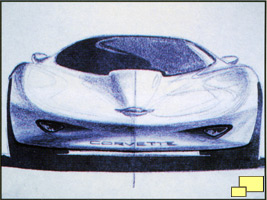 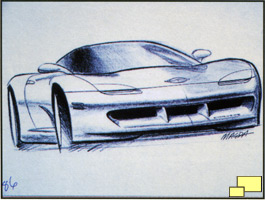 Designer renderings reveal the thinking behind the C5 Corvette. Here we see fluid shapes that, although different from the production car that found its way into Chevrolet dealerships, did strongly influence the final outcome. 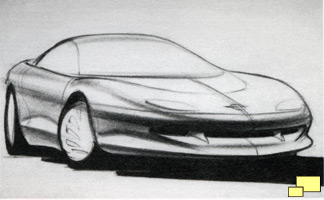 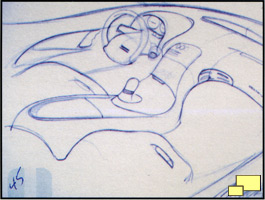 The dash was also all new for the C5. It was more of a dual cockpit motif and hints of the C2 interior were present; note the grab bar for the passenger (right) which would be familiar to the passengers in C1 and C2 Corvettes.

More room in the footwell area was a welcome improvement; there was even room for a "dead pedal" on the far left so drivers could brace themselves during hard cornering. Entry and exit was easier due to a almost 4" lower door sill area and larger doors. 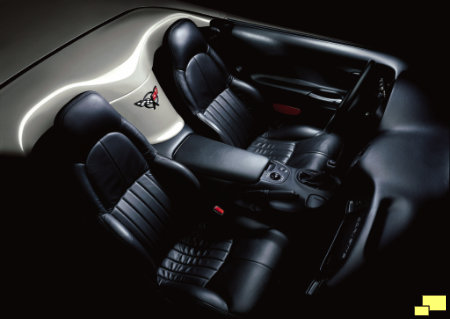 {"commentics_url":"\/\/corvettestory.com\/commentics\/","page_id":1536,"enabled_country":true,"country_id":0,"enabled_state":true,"state_id":0,"enabled_upload":false,"maximum_upload_amount":3,"maximum_upload_size":5,"maximum_upload_total":5,"securimage":true,"securimage_url":"\/\/corvettestory.com\/commentics\/3rdparty\/securimage\/securimage_show.php?namespace=cmtx_1536","cmtx_wait_for_comment":"cmtx_wait_for_comment","lang_error_file_num":"A maximum of %d files are allowed to be uploaded","lang_error_file_size":"Please upload files no bigger than %.1f MB in size","lang_error_file_total":"The total size of all files must be less than %.1f MB","lang_error_file_type":"Only image file types are allowed to be uploaded","lang_text_loading":"Loading ..","lang_placeholder_country":"Country","lang_placeholder_state":"State","lang_text_country_first":"Please select a country first","lang_button_submit":"Add Comment","lang_button_preview":"Preview","lang_button_remove":"Remove","lang_button_processing":"Please Wait.."}