Distinguishing the Z06 rear view is smoked taillights; standard 2015 Corvette taillights are red. The LEDs illuminate red so the appearance is the same when they are functioning.

The Z06 will offer three increasing levels of aerodynamic downforce: 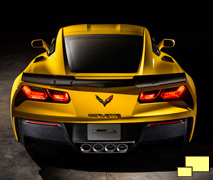 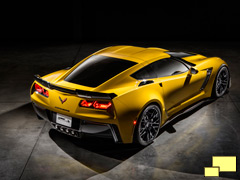 Below: The see-through center section is adjustable to allow at least the promise of better lap times. 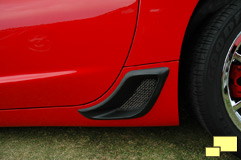 Above: The C7 Z06 is equipped with enhanced rear brake cooling in the form of a lower air intake. Fully functional, they are also reminiscent of the 2001 Corvette Z06 rear brake intake (right).

Above: An engine statistics emblem was mounted on the console of the Z06, sort of a nod to the emblem found on early C3 Corvettes (below).