Amongst car enthusiasts it's been debated for ages but for the C7 we think the convertible is the clear winner. We know that the coupe has certain advantages, especially for track use, with superior aerodynamics and less weight. Designers have their reasons for liking the coupe, insisting that it is technically the better design. The coupe is safer and offers more storage capability. Buyers prefer the coupe; for the 2014 model year, the production score was 71% coupe and 29% convertible. And the coupe costs $4,000 less. 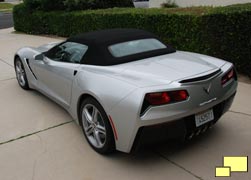 That said, our choice would be the convertible. It is not just the wind-in-your-hair experience although that alone justifies the ragtop route. It just looks better. Top down the convert beckons like nothing else on wheels - which would you want to take for a drive? The look is more svelte; the Corvette was, after all, named after a small lightweight and maneuverable warship. Top up has a certain classic jauntiness to it as well.

The Same, but Different 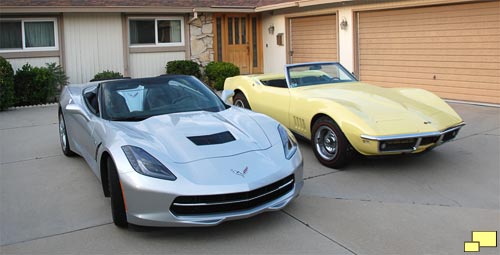 Here's an interesting comparison: a 1968 Corvette convertible and a 2016 Corvette convertible. They are 48 years apart but have similar DNA. The '68 was the first year for the C3 and from a styling and philosophy POV they are closely related. The C3 was the start of the "coke bottle" shape, long with a substantial hood, minimal two seat cockpit and a short rear deck. The C7 notably does not feature four round tail lights which were last seen in the C6 generation. But the genealogy cannot be denied.

We will start with how the two are different. 48 years has seen massive improvements in automotive technology which is evident with this Corvette pairing. The 2016 is faster, consumes less than half the fuel and is eons more comfortable than its aging counterpart. You can add better reliability and superior handling / braking to the list.

"Not fair!" fans of the C3 will protest and they have a point. The C3 has a lot going for it including elements that can't be measured with scientific instruments. There's an emotional factor. The C3 was created just before government regulations came into effect so we have a car designed and conceived by and for car afficionados. Chrome bumpers add a certain sparkle and make it clear where the car ends and begins. The vibrations and the ever present "perfumes" from slight gas, coolant, oil and the various other lubricants leaking give it a certain character and that elusive quantity: soul. Even the gearshift has a personality with linkage that imparts the genuine feel of cogs interacting with each other.

What is amazing, especially given the 48 year age difference, is how alike the two cars are. You see this when driving them one after another. The cockpit experience is eerily similar as the dimensions and seating position have a certain familiarity. This is reinforced by the windshield frame which has an almost identical shape and position in both cars. The sentiments of the Corvette have not changed either - both are fast, fun with generous amounts of wow factor.

The rear view highlights the rear decks which are of different heights. This adversely affects rearward visibility on the C7, especially with the top up*. It's partially made up for by the superior side view mirrors on the C7, but still counts as a rare advantage for the C3.

*not a problem, leave the top down.