GM had been doing some odd things with Corvette with the 2017 through 2019 model years. 2019 production started the week of January 22. This meant that 2018 model year Corvette production, which started in June 5, 2017, was only 9,686 units. Further limiting production was a planned Bowling Green KY plant closing for upgrades in August, September and October.

The last time Corvette production was that low was 9,670 in 1959. This isn't that unusual for GM / Corvette; For various production and model year changes the numbers are not consistent such that you really cannot derive conclusions regarding model year popularity - success based on annual numbers.

During this time the standard Corvette Stingray saw minimal changes. The most significant was the 8L90 eight-speed automatic transmission and the Performance Data Recorder (PDR), both introduced in 2015. Other changes involved available colors and special editions. It is not possible to determine the year of a C7 Corvette by looking at trim and other exterior details.

This was actually our first experience driving a Corvette with the targa roof off. I am basically a convertible devotee, the 1968 in the garage is a ragtop.

The targa, even with the roof off, feels a lot more like a coupe than a convertible. There is still that bulk behind you and over your shoulder. But it is hard to argue with the coupes advantages: It is more aerodynamic, safer, and costs $4,000 less. 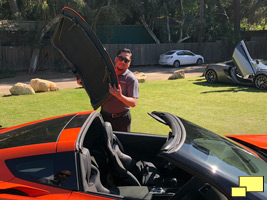 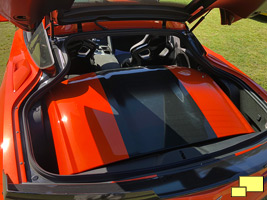 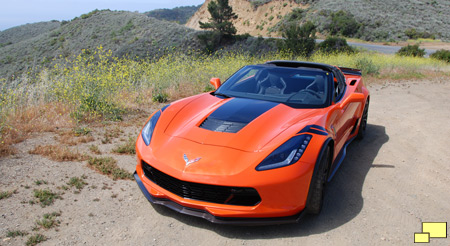 One thing is for sure: The Sebring Orange Tintcoat color, first available in 2018 Corvettes ($995.00) built in December 2018, just "pops". We first saw it at the Los Angeles press introduction which was a night event and the effect of the color was very dramatic. It's the same in the bright sunlight. It's clearly a classic Corvette color. 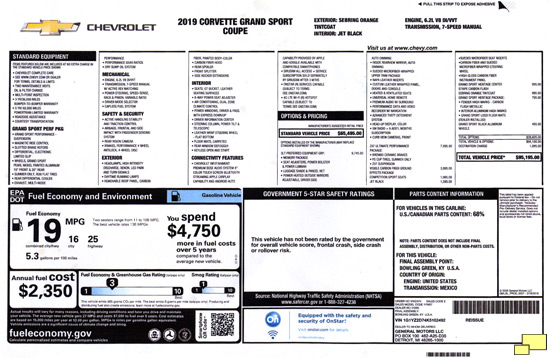 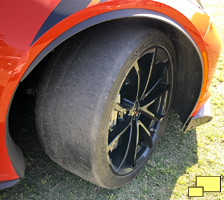 The Michelin Pilot Sport Cup 2 Tires (285/30-19 front and 325/25-20 rear) summer-only tires are clear evidence of the Grand Sport race track intentions. The untrained observer might think that the lack of tread means they are worn out but in reality it makes for a big improvement in speed at the track. GM's official admonition ("Do not use summer-only tires in winter conditions, as it would adversely affect vehicle safety, performance and durability.") needs to be taken seriously as rain or snow would make it unsafe.

For the 16th time in the history of the Indy 500, a Corvette paced the race. Dale Earnhardt, Jr. Drove for the start of the race and Sarah Fisher was the driver for the caution laps.

The End of a Magnificent Run 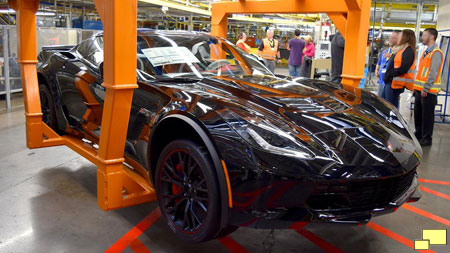 The C7 Corvette had been in production since 2014 or six model years. It was a short run by Corvette standards; only the C2, which ran for five models years, was shorter.

The last C7, a Z06, was auctioned off by Barrett-Jackson on June 28, 2019 and benefitted the Stephen Siller Tunnel to Towers Foundation’s Smart Home program, which builds smart homes for our most catastrophically injured service members returning home.

{"commentics_url":"\/\/corvettestory.com\/commentics\/","page_id":935,"enabled_country":true,"country_id":0,"enabled_state":true,"state_id":0,"enabled_upload":false,"maximum_upload_amount":3,"maximum_upload_size":5,"maximum_upload_total":5,"securimage":true,"securimage_url":"\/\/corvettestory.com\/commentics\/3rdparty\/securimage\/securimage_show.php?namespace=cmtx_935","cmtx_wait_for_comment":"cmtx_wait_for_comment","lang_error_file_num":"A maximum of %d files are allowed to be uploaded","lang_error_file_size":"Please upload files no bigger than %.1f MB in size","lang_error_file_total":"The total size of all files must be less than %.1f MB","lang_error_file_type":"Only image file types are allowed to be uploaded","lang_text_loading":"Loading ..","lang_placeholder_country":"Country","lang_placeholder_state":"State","lang_text_country_first":"Please select a country first","lang_button_submit":"Add Comment","lang_button_preview":"Preview","lang_button_remove":"Remove","lang_button_processing":"Please Wait.."}