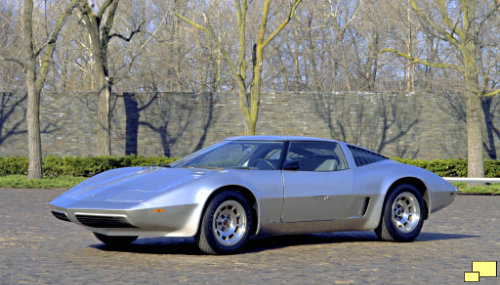 There actually has been a considerable number of mid-engine Corvette prototypes and possibly the most significant one is the 1973 Aerovette. 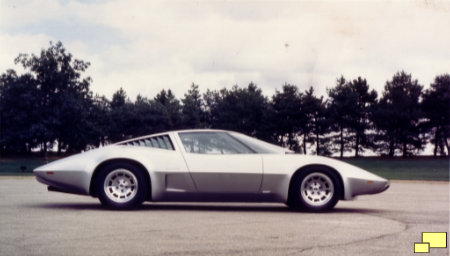 A 3/8th scale model of the Corvette Four Rotor / Aerovette was tested at the California Institute of Technology and produced a drag coefficient of 0.325, quite low for 1973. 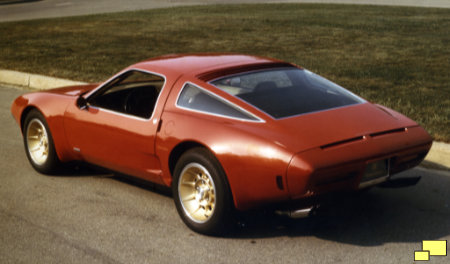 Image courtesy of Chuck Jordan Archives
There was a predecessor to the four rotor Aerovette: The Two Rotor prototype, which was based on a Porsche 914 chassis. It came in handy in 1970 as Ford was introducing the Pantera and GM used it for display at the auto show circuit as a counterpoint to the new Ford product. 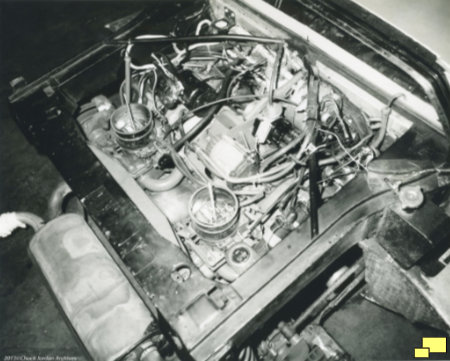 The four rotor engine in the Aerovette was actually two two rotor Wankel engines harnessed together by a chain drive. They shared common water and oil pumps but each engine had its own distributor and Quadrajet carburetors.

At the time GM was keen on the rotary engine. But then the first of two gas crisis hit in the 1970s and the rotory's excessive fuel consumption caused its enthusiasm to disappear.

With the existence of the four rotor Aerovette it could be said that a Corvette was officially equipped with a rotary engine although none were sold to the public. When it became clear that a rotary engine was not part of GMs future, a Chevrolet V8 was installed and it was renamed Aerovette. The car still exists and is located in a GM museum. 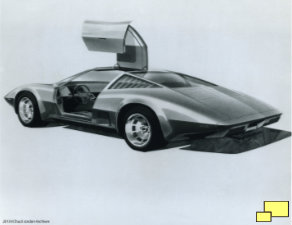 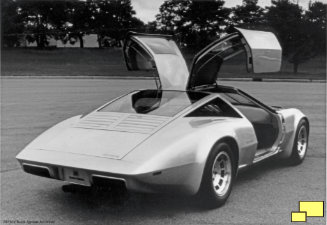 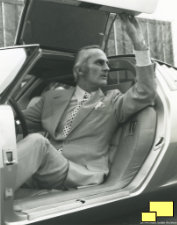 The Corvette Four Rotor / Aerovette featured gullwing doors with a unique bi-fold design which unfortunately precluded any window opening possibilities. How this would have been dealt with had the car gone in production is not known. The design did offer a lower sill, making entry and egress much easier than conventional gullwing designs. 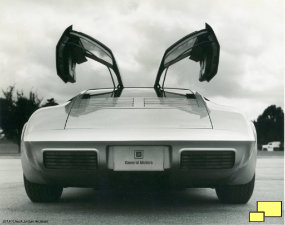 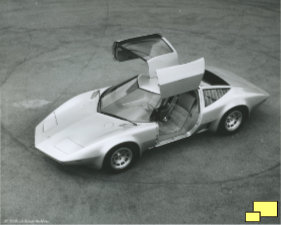 To show case the Wankel engine for which GM had just bought the rights, Mitchell asked one of his studios to design a mid engine Corvette using a 4 Rotor Wankel and he told us what he wanted - a clean profile pointed at both ends. One designer [Jerry Palmer] in particular did not like the 'pointed at both ends'. He showed Mitchell his sketch of alternates twice and each time he was turned down. The 3rd time Michell said to him "Listen, kid - design is like baseball. 3 strikes and you're out". The final design was pointed at both ends.

{"commentics_url":"\/\/corvettestory.com\/commentics\/","page_id":1605,"enabled_country":true,"country_id":0,"enabled_state":true,"state_id":0,"enabled_upload":false,"maximum_upload_amount":3,"maximum_upload_size":5,"maximum_upload_total":5,"securimage":true,"securimage_url":"\/\/corvettestory.com\/commentics\/3rdparty\/securimage\/securimage_show.php?namespace=cmtx_1605","cmtx_wait_for_comment":"cmtx_wait_for_comment","lang_error_file_num":"A maximum of %d files are allowed to be uploaded","lang_error_file_size":"Please upload files no bigger than %.1f MB in size","lang_error_file_total":"The total size of all files must be less than %.1f MB","lang_error_file_type":"Only image file types are allowed to be uploaded","lang_text_loading":"Loading ..","lang_placeholder_country":"Country","lang_placeholder_state":"State","lang_text_country_first":"Please select a country first","lang_button_submit":"Add Comment","lang_button_preview":"Preview","lang_button_remove":"Remove","lang_button_processing":"Please Wait.."}