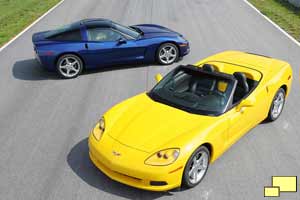 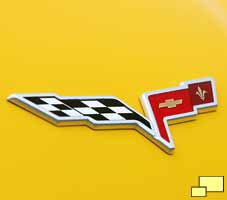 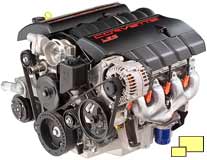 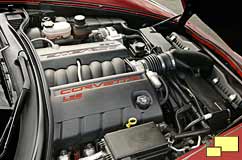 The engine evolved, with displacement up by 18 cu in. to 364 cu. in. (6.0 liters) via a bore increase. Other engine changes, besides the designation update to LS2, included a compression ratio of 10.9:1 (was 10.1:1), more cam lift, better breathing on both the intake and exhaust and a redline (right) of 6,500 RPM - 500 RPM more than last years' C5 LS1. Output was 400 horsepower and 400 lb.-ft. of torque - both nice, evenly matched round numbers achieved without subjecting buyers to a gas guzzler tax.

The shifting characteristics were improved on the Tremec T-56 six speed manual transmission. The throws on the shifter are shorter (6.56" / 166.68 mm.) and had an excellent direct feel to them. The clutch effort is reasonable, especially for a high horsepower engine.
The skip shift economy mode, a "tradition" dating back to the first C4 manual tranny was part of the C6 six speed. When driven moderately, shifting out of first caused fourth to be selected rather than second. Aggressive driving resulted in normal gear selection. The EPA ratings were MPG 18 mpg city, 28 mpg highway and 21 mpg combined.

{"commentics_url":"\/\/corvettestory.com\/commentics\/","page_id":1381,"enabled_country":true,"country_id":0,"enabled_state":true,"state_id":0,"enabled_upload":false,"maximum_upload_amount":3,"maximum_upload_size":5,"maximum_upload_total":5,"securimage":true,"securimage_url":"\/\/corvettestory.com\/commentics\/3rdparty\/securimage\/securimage_show.php?namespace=cmtx_1381","cmtx_wait_for_comment":"cmtx_wait_for_comment","lang_error_file_num":"A maximum of %d files are allowed to be uploaded","lang_error_file_size":"Please upload files no bigger than %.1f MB in size","lang_error_file_total":"The total size of all files must be less than %.1f MB","lang_error_file_type":"Only image file types are allowed to be uploaded","lang_text_loading":"Loading ..","lang_placeholder_country":"Country","lang_placeholder_state":"State","lang_text_country_first":"Please select a country first","lang_button_submit":"Add Comment","lang_button_preview":"Preview","lang_button_remove":"Remove","lang_button_processing":"Please Wait.."}