September 18, 2011 - Had a great time at the Redline Corvettes All Corvette Car Show in Thousand Oaks. "Safari" was entered in the Stock C3 Hoods Down category and took second place! Considering that the competition was of a high caliber, this was a pleasant surprise. Below left and center: The judging, always a nervous time. Special thanks to spousal unit Francie who was very diligent with the detailing task. 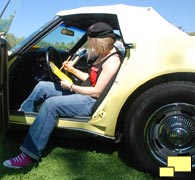 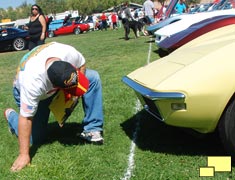 The alarm, which was an option for 1968 (RPO UA6, $26.00) was a bit of a puzzle. The key port on Safari, located in the middle of the rear bumper area above the "Corvette" script (below right), was different than seen on other Corvettes of the era which were of a different shape and flatter. Speculation was that it might have been a aftermarket installation or maybe the key switch itself had gone bad and was replaced by a previous owner. Another 1968 owner told me that the factory alarm installation included a relay under the storage compartment located behind the passenger seat. Removing the inner liner revealed the jack and wheel lug wrench. Under the jack and next to the flasher module was the relay (below right), so Safari was equipped with the factory alarm. I still don't have the key and probably won't bother to get one in the near future as it won't be of much use. This appears to be something that was installed in late 1968 Corvettes as a couple of other later built 1968s had the alarm even though only 388 (1.6%) were so equipped. Production for the alarm was upped to 12,436 (32%) in 1969. 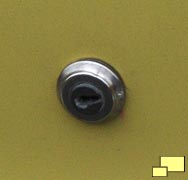 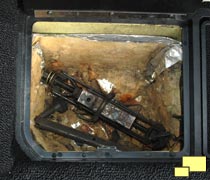 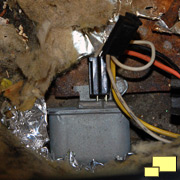 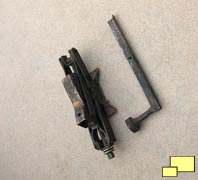 Left: Jack and spare tire lug wrench. It looked almost like it had never been used! Still seems operational even thought it could use some WD-40 to loosen things up a bit. Now on my to-do list: release the spare tire to see what I've got and maybe even try a practice run at changing a tire.

"SFRI YLW" - short for "Safari Yellow" personalized plates were obtained. My past experience is that nobody from the general public will get it, but that's OK.

Below: I've decided to "go commando", a California term* for not installing a front license plate. They ugly up the car way too much as well as to restrict valuable airflow to the cooling system. 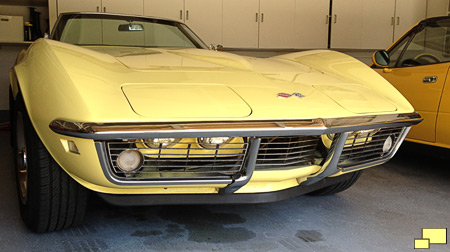