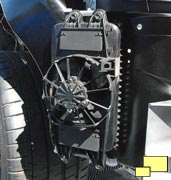 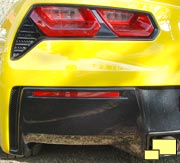 Unlike some of the past Corvette iterations, the various vents on the C7 are functional and well thought out. Above left and middle: air intake mounted above the rear wheels. Above right: Transmission cooler located on the drivers' side. Z51 equipped Corvettes have a similar cooler for the e-LSD differential on the passenger side.

Right: Air exits via vents located near the tail lights and the rear fascia. 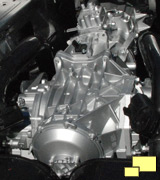 A smart electronic limited-slip differential (eLSD) is included in the Z51 Performance Package and continuously optimizes the torque split between the rear wheels. The system features a hydraulically actuated clutch that can infinitely vary clutch engagement and can respond from open to full engagement in tenths of a second. It shifts torque based on a unique algorithm which factors in vehicle speed, steering input and throttle position to improve steering feel, handling balance and traction.

The eLSD is fully integrated with StabiliTrak and Performance Traction Management systems. Its calibrations vary among three modes, based on the Drive Mode Selector setting: 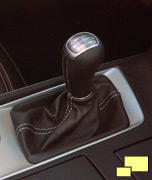 The main justification for the seven speed transmission seems to be to make the specifications look good and to improve fuel economy. The gears are ridiculously tall which is one of the reasons the C7 does not suffer the indignity of a gas guzzler tax. Engine revs at 70 MPH is a decidedly lazy 1,500 RPM. Test reports say that top speed is actually achieved in fifth gear; going to sixth or seventh will slow things down as there is insufficient power at the lower engine revs to push the air out of the way. The non ZR1 C6 generation six speed Corvettes told the same story; their top speed was obtained in fifth gear.

Active Rev Match (ARM) is included with every manual transmission 2014 Corvette. It works by matching the engine revs (up to 5,400 RPM) to the anticipated engine revs for the selected gear and road speed before the clutch is engaged. The system is normally off and is activated by the paddle switches on both sides of the steering wheel and does not operate if the accelerator pedal is applied. The system is controversial amongst some drivers who feel that it isn't necessary with proper driving techniques and that manual rev matching could become a lost art with such systems. Advantages do include potentially better reliability along with reduced warranty claims, something that will make the GM bean counters happy. 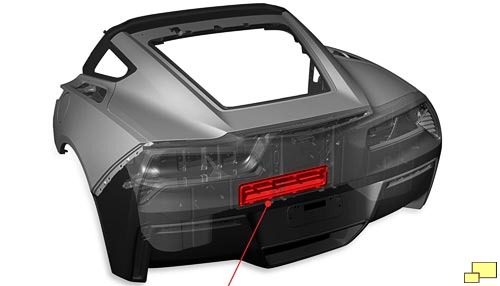 An ingenious new smart wire is used to activate a vent (above, in red) that allows for easier closing of the trunk lid. When the trunk is opened, an electrical current is applied to the wire (below) causing it to heat up, making it shorter and causing the vent to open. When closed the electrical current is off allowing the wire (known as a "shape memory alloy wire") to return to its' original shape, closing the vent. The system is simple, saving the cost and the 1.1 pound weight of an electric motor. 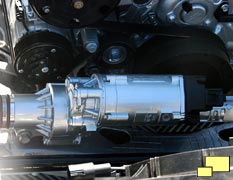 Much of the credit for the excellent road manners of the C7 Corvette goes to the new electric power steering which offers assist based on driving conditions and the driver selected mode (Sport, Touring or Track). There's a variable ratio system accomplished by the spacing of the teeth on the steering rack. GMs claim of an overall increase in steering system stiffness is believable; it now feels more direct and solid with zip amounts of play and excellent on center feel. The result can make amateur and occasional track participants (in other words, most of us) faster sooner but probably won't affect pro drivers.

The electric power steering pump system has other advantages that include (slightly) better fuel economy, along with better reliability. With no hydraulic fluid and one less thing for the accessory belt to accommodate, you can add simpler maintenance to the list.

The Magnetic Selective Ride Control (RPO FE4: $1,795) shock absorber system was upgraded to a dual coil system for the C7. It is a direct relative of the Magnetic Selective Ride Control (RPO F55; $1,695.00) introduced in the 2003 Corvette and is an evolutionary form of Active Handling technology research from the early 1990s. For 2014 it is only available on Z51 equipped Corvettes although that could change in the future. The new dual coil system offered faster response time (not that anyone complained about the slow response time of the previous system) due to - in engineering speak - reduced eddy currents. A faster computer system enabled damping force changes up to 1,000 times per second.

The advantages of FE4 and previous MR (as the Magnetic Selective Ride Control came to be known as) systems was to offer daily driver comfort and a race track competitive suspension in the same car.