The Corvette has taken the lead in the use of lightweight materials, having been made of fiberglass when first introduced in 1953. It has also pushed the envelope in carbon fiber development; witness the 2004 Z06. The 2009 ZR1 had a carbon fiber roof and for 2014 every Corvette - not just the premium models - will see carbon fiber roofs and hoods.

The C7 Corvette is distinctly different from its C6 cousin; GM had been stung by criticism that the C6 was not that much different from the C5; some called it the C5 11/16s. Previously the only generation featuring all new components - defined as an all new body, chassis and drivetrain - was the C5, introduced in 1997. The C7 can also legitimately claim to be all new; GM says that the two sole parts that are carried over from the C6 is the cabin air filter and a roof latch. 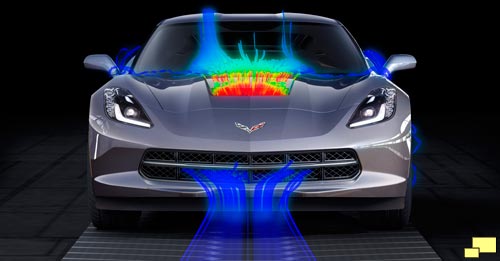 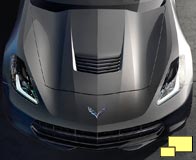 The radiator airflow arrangement is special and new for the C7. Air intake is through a conventional grill (above) but then exits through hood vents. The system plays a part in the overall aerodynamics of the Corvette as seen in the above and below views with the air currents in blue and hot air exiting the radiator in red. 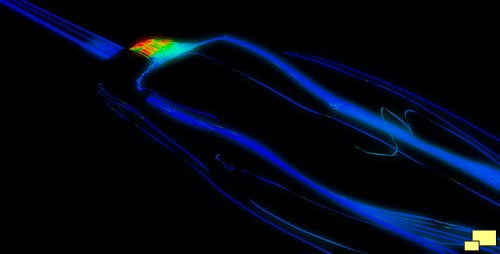 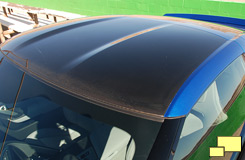 All 2014 Corvette roofs are carbon fiber but with option C2Z ($1995.00) you get to see that carbon fiber. Word is that only those roofs that pass strict appearance standards get a clear coat; the rest are body colored. 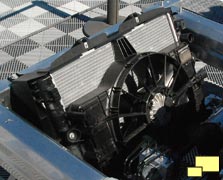 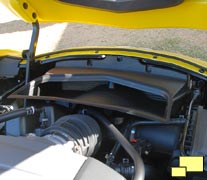 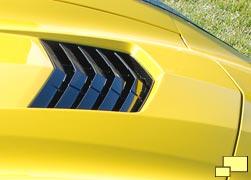 Right: C7 radiator; Middle: engine compartment shroud that channels air that has exited the radiator to the hood vents (right). The hood air extractor's vanes are angled for optimum airflow, more proof that the aerodynamicists did not miss anything. 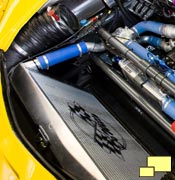 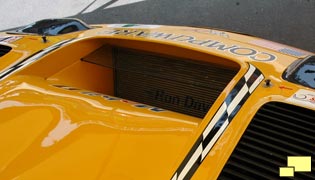 In case there was any doubt: racing does improve the breed. Corvette engineering took some advice from their racing brethren and positioned the radiator in a forward lean; previous generation Corvettes were famous for their backward leaning radiators. Left: C6 Corvette race cars; Middle: C6 Corvette race car radiator installation; Right: C5 cooling system air outlet. Not only was the system efficient regarding airflow, the improved aerodynamics give both the racing and the street Corvettes more downforce in the front where it is needed.

As a great man once said: "If it looks good, it works good". Much of the exterior appearance of the C7 Corvette is what it is for aerodynamic reasons. Below: unusual hood shape allows air to be channeled to the sides instead of buffeting against the windshield. There were two main goals for the engineering folks: downforce for high speed stability and low drag for optimum fuel economy.