Some things are best off staying the same. The basic Corvette formula - long magnificent hood, a minimal two seat passenger area and a short rear deck - has served the Corvette well and continues in 2014. 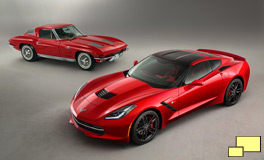 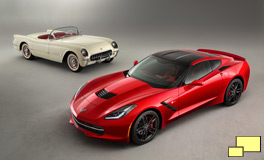 It shouldn't come as a surprise that GM would make available press photos of the 1963 Corvette along with the new 2014 C7. It was in 1963 that the public was first able to purchase a Sting Ray model. Right: 2014 Chevrolet Corvette C7 with a 1954 Corvette. 1953 was the first year for the Corvette and 1954 featured the same body style.

Return of the Stingray 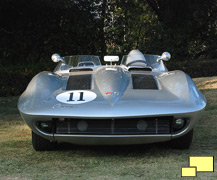 GM has a habit of reaching into the past when it comes to assigning product identities; recent use of the Z06, Grand Sport and ZR1 monikers come to mind. So not a lot of people were surprised when the C7 Corvette was introduced as the Corvette Stingray. The name first appeared in the Bill Mitchell inspired 1959 Sting Ray Racer. The term "Sting Ray" (note the two words) was first introduced as a model designation for the 1963 Corvette (below) and served as a label thru the 1967 model year. It was given a rest in 1968 but then returned to service in 1969, this time as "Stingray", a single word. The label was last seen on 1976 Corvettes. 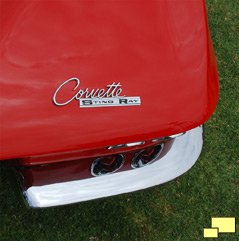 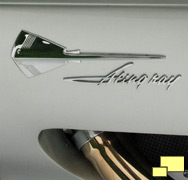 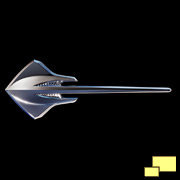 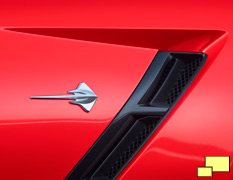 For the C7 GM decided to go with "Stingray" - one word - as seen on 1969 thru 1976 Corvettes. The term and the emblem was first seen on the 1959 Sting Ray Racer on the side near the where the exhaust pipe exited (above left). Middle and right: the C7 emblem which appears on the C7 edition just aft of the brake cooling outlet.

Press photograph from GM at the C7 introduction offers a view (from left to right) of the 1959 Sting Ray Racer, 1963 Sting Ray Coupe and C7 Stingray.

For the 12th time - and the second year in a row - a Corvette paced the Indianapolis 500 on May 2, 2013. Jim Harbaugh (Michigan Wolverine football coach) drove the 2014 Stingray at the start while Johnny Rutherford did caution period driving.

The cove, a now famous Corvette styling element, first saw use in the 1956 Corvette. It was an immediate hit and contributed significantly to the success of the Corvette as a styling masterpiece. The cove remained through the C1 generation which ended in 1962. Pictured is a 1957 Corvette cove.

Above: The cove concept took a break for the C2, C3 and C4 generations, returning in a more updated and subdued form in 1997 with the C5.

A muted and more angular cove continued for the C6.

The C7 offers styling elements that honors the 1956 trendsetter by hinting at the past while at the same time presenting a look that is thoroughly modern and capable of carrying the Corvette well into the future.
Note: Clicking on an image with this symbol (