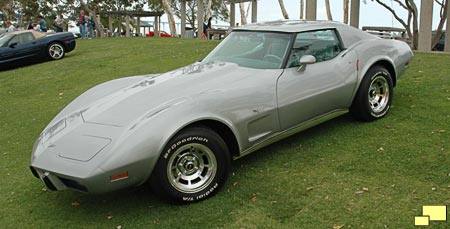 Minimal changes for 1977 include a revised tilt / telescopic steering column for option RPO N37 with the steering wheel two inches further away from the driver resulting in more of a "extended arms" driving position. 1977 Corvettes without RPO N37 (a minority, as almost 95% of 1977s were equipped with the option) suffered with the 1976 steering wheel which was shared with the Chevrolet Vega.

Other interior changes included a revised hand brake location and a one inch longer manual transmission shift lever; this was done to eliminate occasional hand banging collisions with the hand brake during hard shifting. 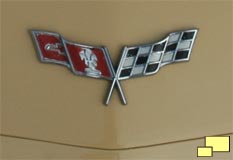 Right: The crossed flags hood emblem made its debut in 1977.

Very distinctive and for 1978 only: a special edition pace car was available. Approximately 6,502 were sold. 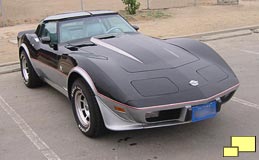 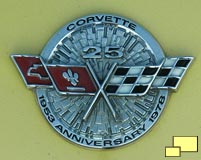 Left: The graphics came with the car but were not installed (right), leaving the owner with that important decision.
Right: 25th anniversary hood emblem was exclusive for 1978. 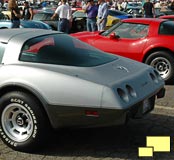 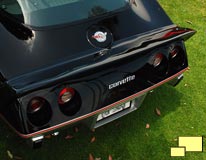 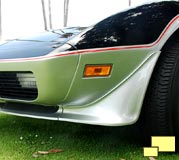 Above, left: The big change for 1978 was the fastback body style. This would continue for the balance of the C3's career, until 1982. Above right: a rear spoiler and (right) front air dam was introduced.
Note: Clicking on an image with this symbol (

{"commentics_url":"\/\/corvettestory.com\/commentics\/","page_id":1480,"enabled_country":true,"country_id":0,"enabled_state":true,"state_id":0,"enabled_upload":false,"maximum_upload_amount":3,"maximum_upload_size":5,"maximum_upload_total":5,"securimage":true,"securimage_url":"\/\/corvettestory.com\/commentics\/3rdparty\/securimage\/securimage_show.php?namespace=cmtx_1480","cmtx_wait_for_comment":"cmtx_wait_for_comment","lang_error_file_num":"A maximum of %d files are allowed to be uploaded","lang_error_file_size":"Please upload files no bigger than %.1f MB in size","lang_error_file_total":"The total size of all files must be less than %.1f MB","lang_error_file_type":"Only image file types are allowed to be uploaded","lang_text_loading":"Loading ..","lang_placeholder_country":"Country","lang_placeholder_state":"State","lang_text_country_first":"Please select a country first","lang_button_submit":"Add Comment","lang_button_preview":"Preview","lang_button_remove":"Remove","lang_button_processing":"Please Wait.."}