The convex rear bumper on the ZR-1 proved popular and was incorporated in the 1991 through 1996 Corvettes. The ZR-1 bumper (below) could be distinguished by the raised lettering and the the lack of a center brake light which was roof mounted. 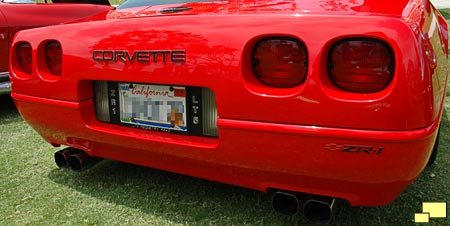 Sawblade wheel, as they were affectionately known, were standard equipment in 1991 through 1996 Corvettes. For 1991 and '92 they were painted.

1992 Corvette exterior was identical to 1991. The big news was under the hood with the introduction of the LT1 engine.
Note: Clicking on an image with this symbol (