Below: 1973 rear bumpers were the same as previous years. The combination of chrome bumpers on the rear and non-chrome bumpers in the front is exclusive to 1973, making that year easy to spot. 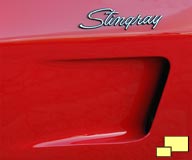 Right: The front fender louver was simplified to a single scoop. Note that the "Stingray" script remained.

1974 completed what was started in 1973 when the rear bumpers got the urethane cover treatment.

The 1974 Corvette rear bumper was a two piece design which was exclusive for that year. Later years were a one piece solution that also featured bumper under-riders.
Note: Clicking on an image with this symbol (